Lassen Volcanic National Park, located in Northern California, is home of Lassen Peak: the world’s largest plug dome volcano. The other three types of volcanos (shield, cinder cone, and strato) can be found within the park as well.

The park is a four hour drive from San Francisco without traffic. We weren’t so lucky. I had been in California with my fiance, Keith for eight days before I hiked the John Muir Trail. Our plan was to drive up to Lassen, over to Calaveras State Park and end in Yosemite. We started in San Francisco and visited some vineyard and breweries on our way up routes 101 and 5.

There are eight different campgrounds to stay at and each one is unique. We wanted to camp close to Lassen and the surrounding peaks. The PCT passes through the other side of the park. We decided on Crags Campground situated at 5700 feet.

Each campground comes with a fire pit and a metal food locker. The trees are large but much more sparse compared to camping on the East Coast. Out of 45 sites there were maybe 15 that were occupied. This was during the week in mid July.

The food lockers are very spacious. Both doors open so you can even store a cooler in it. We improvised with an insulated Trader Joe’s tote!

Of course we had to get some local California refreshments. I enjoyed Devoto Orchard’s cider (as you can tell from it being almost empty…) and Keith had a variety including Mendocino Brewing company’s Black IPA and a Black Butte Porter from Deschutes Brewery.

We enjoyed our first day with some hiking on some shorter trails, checking out the small park museum, and sitting by the fire. The following day we got up reasonably early to hike!

Lassen Peak was closed for much of summer 2014. In fact the next time it would be open was Labor Day weekend. You could hike a good chunk of it, but the summit and part of the trail leading to it was inaccessible due to major trail maintenance efforts. We knew this beforehand and already planned on hiking Brokeoff mountain.

While only 7.4 miles roundtrip, book time is a surprising six hours. It is said to be one of the toughest hikes in the park with 2600 feet of elevation gain.

The first two miles of hiking is a steady climb through beautiful open meadows and forest.

Throughout the hike, mule deer sightings are abundant!

Brokeoff Mountain was once part of a large volcano called Mt Tehama. This mountain has existed since the Ice Age, but had been carved away by massive glaciers leaving only a piece of the mountain left: Brokeoff.

The trail continues by stream flows through a mix of grassy meadows and patches of trees. The trail soon crosses the stream and climbs through thinning woodland, out to a viewpoint on a stony knoll. This would be our last grand view of the day.

As we gained elevation, the fog rolled in. We rounded each switchback surrounded by a thick cloud of fog. We knew we wouldn’t be seeing views of Lassen peak or the surrounding area, but we enjoyed the fog.

On our hike we saw more wildlife than people. There were only two other pairs of hikers on the trail.

The total hike took us 4 1/2 hours with short breaks. With more ideal weather, we would have easily spent another hour taking in the views. It did give us some time to explore more of the park that afternoon!

A quick drive down the park road lead us to Bumpass Hell. It is the largest hydrothermal area in the park and named after an early settler who severely burned a leg after falling into a boiling pool.

This area of the park is very touristy. This hike is a mere 2 miles roundtrip and a 300 foot descent making it an ideal hike for families. We saw lots.

You will not see any hydrothermal activity until you reach nearly the end of the hike. Much of the “trail” is also on boardwalks. I wasn’t very impressed until we got to the end.

Quite a distance you get a whiff of rotten eggs. Once you reach the end, you will see a large concentration of thermal activity. The largest fumarole in the park has actually been measured as high as 322°F (161°C), making it one of the hottest fumaroles in the world.

While quite touristy, Bumpass Hell is definitely worth checking out. Make sure to get a Bumpass Hell postcard at Lassen’s camp store!

Next Story
Hiking Outside of Moab: Jeep Arch 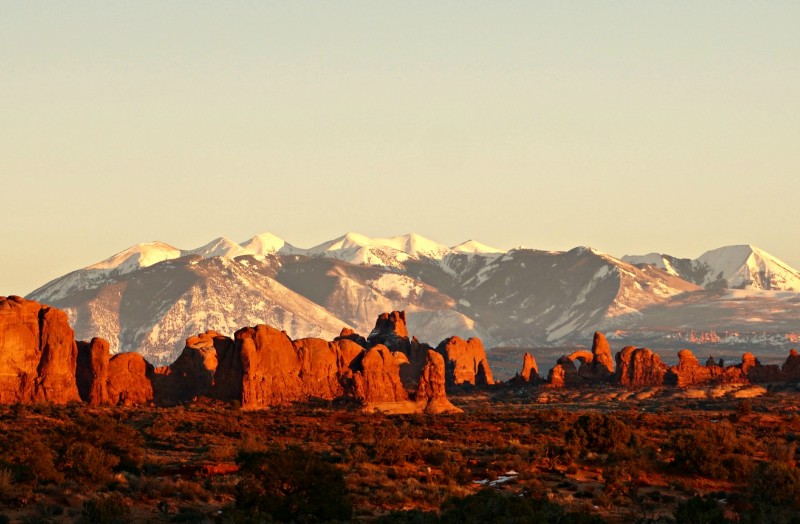 2 Responses to :
Camping and Hiking in Lassen Volcanic National Park