Cannon Mountain is one of the most notable mountains in the northeastern United States. For almost 200 years it was best known as the site of the “Old Man of the Mountain”, a series of rock ledges that resembled a jagged profile of a man’s face. This formation became the state symbol of New Hampshire, used on highway signs, license plates, and the commemorative state quarter coin, but collapsed on May 3rd, 2003.

The parking area at the base of the Cannon Tramway is the start of the Kinsman Ridge trail. Take exit 34B on the Franconia Parkway, turn left at the bottom of the ramp and park in the lot. Follow the signs to the trailhead. No WMNF Parking Pass is required.

The most direct route up the mountain is the Kinsman Ridge trail, running from the ski area base to the summit in 2.2 miles. This is the trail that I, along with four others, took.

We began hiking at 9:30 am from a cold and windy parking lot. All bundled up, we ascended Cannon with traction. Four of us wore microspikes while one wore crampons. It had snowed the day before, but there was little accumulation.
c

The trail starts off steep. So steep that fifteen minutes into the hike we were taking off a layer. The trail is steep for the the majority of the hike, only letting up in small sections. It’s a short hike to the summit, but you climb 2,100 feet of elevation in just 2.2 miles.

The scenery was breathtaking. I felt like every thirty feet there was something interesting to look at. Everything looks so majestic in winter.

A large portion of the trail is a black diamond ski trail: the Kinsman Glade. It is considered one of the longest glades in the East. While hiking, we saw two skiers making flying down. We thought they were absolutely insane. It takes a lot of skill to avoid all the trees and snow drifts on skis!

A little over halfway up the mountain you see the sign above making a route that diverges to the left, separating from the ski trail. When we arrived at the section leading to a lookout, we saw one of those pay-per-view binoculars. We thought we’d cheer him up!

At 1.5 miles, our effort was rewarded with a spectacular outlook of the Franconia Range, including Lafayette and Lincoln.

After some steep switchbacks we arrived at the observation tower. We stayed maybe three minutes as it was really windy. Leading up to the summit it was a balmy zero degrees… we’re not sure what the temperature was with wind chill factored in.

After a little over two miles and 2,100 feet of elevation gain, we made our way to the summit lodge. We treated ourselves to hot drinks, soup, and sandwiches. Tom shared his chocolate covered figs-yum! After an hour in the lodge, we decided to head down or we may become to lazy and go down the ski lifts!

On our way down we made sure to enjoy the views. There was an undercast cloud sweeping by, but we got a peek at Lafayette. We met a man hiking with snowshoes and his dog, Kara. He was from the area and pointed out many of the peaks in view.

We took a side trip down to where the Old Man of the Mountain used to be and looked out over the Franconia Ridge.

Before we merged with the Kinsman Glade and the ledges, Brenda and I did a little butt sledding. Next time we’ll have to get a video of it! What a blast!

Cannon was a very fun, but steep hike. I highly recommend hiking it in winter. Thanks Brenda, Anne, Annette, and Tom for the wonderful company and pictures!

Quick Facts:
Approach from: Tramway parking lot, exit 34B
Height: 4100 feet
Distance: 4.4 miles RT
Hiking time: 4:20 hike time. We were hiking in winter conditions and enjoyed the views! This does not include our hour at the summit lodge, but does include all other breaks. 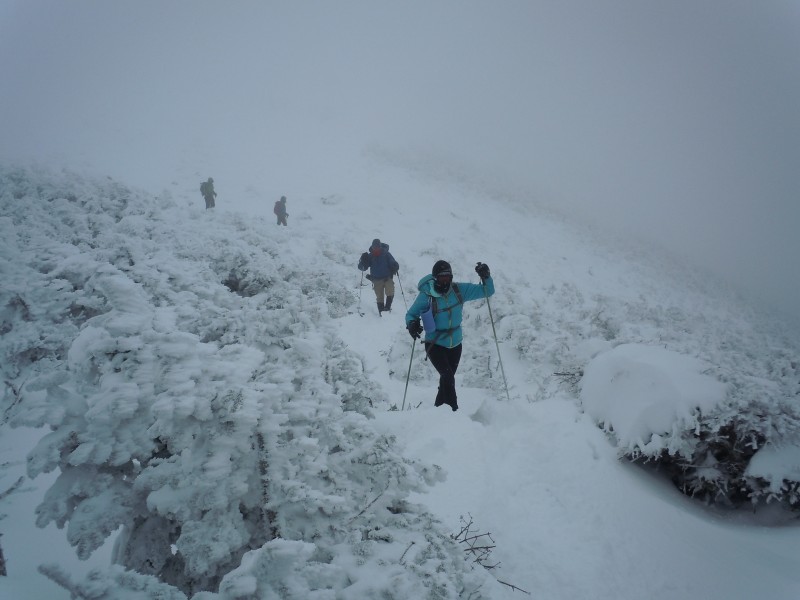