Recently I became the organizer of a hiking Meetup group and led my first hike with the group on January 14th: Mount Tecumseh. I rode up with Nancy, a member of the group, to the Waterville Valley ski area. We met up with another member, Joe and at 10:30 we began hiking.

Joe and I used traction (I was able to use my microspikes) while Nancy barebooted up the mountain. There were a few inches of snow, but others had already been up the trail, making the trail easy to follow.

The ascent up Tecumseh (4,003′) was moderate for the first section of the hike. I picked this mountain because we would be below treeline for the entirety of the hike. There were only a few short stretches that were chilly even though it was reported to be 13 degrees and windy. I felt bad for the people sitting on the chair lifts!

According to Joe, the trail looked like a scene from Rudolph the Red-Nosed Reindeer. I couldn’t agree more! The trees were pretty squeaky, too; We were waiting for the abominable snowman to pop out of the trees!

About halfway through the hike we arrived at a sign indicating a view. We encountered a group learning about winter hiking who were practicing using crampons. The view was gorgeous and made us anxious to reach the summit. Many reports I read noted that Tecumseh lacks views and is a disappointing summit. I wondered if they were right.

After a long, steep climb (Ok, there are no good pictures of that part of the trail, but it was steep!) we reached the summit sign. This is probably the greatest sign I have seen on a trail. We went left to the summit. I wondered what our elevation was around here and my very handy altimeter said we were around 4500 feet…. I don’t know if it was the weather, if I need to replace the battery, or we were mistakenly hiking on Moosilauke, but it wasn’t accurate at all!

The last stretch was like walking on a balance beam. The snow was a little deeper and you couldn’t really tell where the sides of the trail were. We enjoyed some views before making the final push to the summit.

The summit views were impressive. They’re not as awe inspiring as the views from Carrigain, but based on what I was expecting, I was very satisfied. The snow gave us a little boost and weighed down the branches, getting us a better view than you would have in summer. We could see the Tripyramids, a trio of summits I was on months earlier.

On the way down, we tried our hand at butt sledding. We had a blast! I went down on an industrial garbage bag and smoothed out the trail for Joe and Nancy. Joe came down quick with his slippery snowpants.

Tecumseh was a quick winter hike. We got back to the lodge by 2:30 so we were on the trail for less than four hours. Parking was busy as it was a long weekend and we had fresh snow. We saw lots of people today which made the trail pretty packed down. There was only one blowdown which was very easy to climb over and only one stream crossing at the start of the hike. It was a great day to be out!

Quick Facts:
Approach from: Waterville Valley Ski Area. From the south Take I-93 North to the Campton exit, Route 49 / Waterville Valley. Follow Route 49 through the town of Campton, and take a left at the sign for the Waterville Valley Ski Lodge. Trailhead is down the road on the right of the main lodge.
Height: 4003′
Distance: 5.2 miles RT
Hiking time: 3:50 total time on trail including breaks along the way. We only stayed at the summit for 10 or so minutes as it was windy. 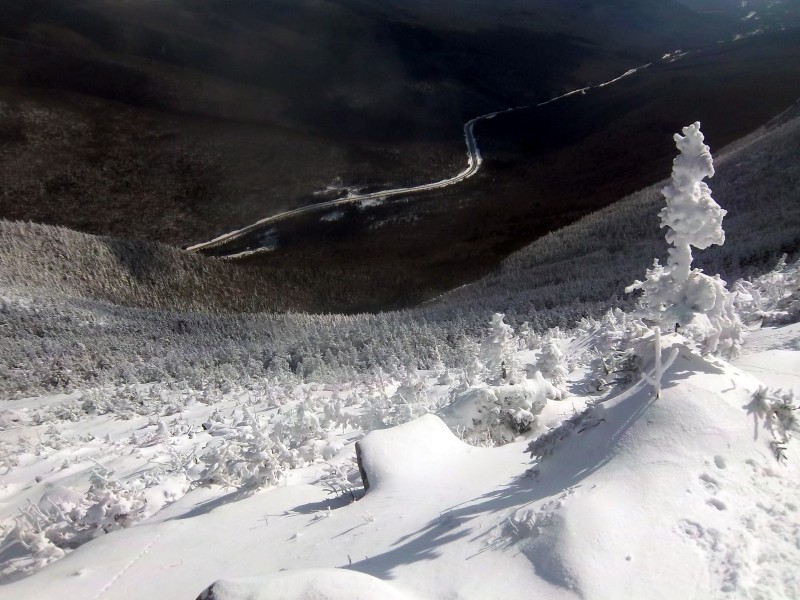 One Response to :
Hiking Mount Tecumseh in Winter