Vose Spur: regarded by many (of the few) who have hiked it as one of the hardest buswhacks on the New England Hundred Highest List. The Appalachian Mountain Guide even states this in the brief mention of this trailess peak. We (Robin, Jill, and Don- of Outdoor Diversion) wanted to get this hike in before snow hit and some of us ended up making plans to hike two bushwhacks the same weekend.

Vose Spur actually begins in a familiar place: Signal Ridge Trail. We parked and headed up, accompanied by a few groups heading up to hike Mt Carrigain.

Jill and Robin on Signal Ridge

The trail has been relocated since a few of us hiked it with one less stream crossing. It was a beautiful trail to enjoy the last of the beautiful autumn foliage.

We felt a little spoiled getting to spend this much time on a relatively flat and marked trail!

The ground was so thick with fallen leaves. It was quite a loud trail! It was also littered with rocks of all shapes and sizes hiking beneath the blanket of leaves. Careful footing was necessary.

Soon enough you will see a very large rock in a muddy area. Step across the rocks around the rock to reach a final section of trail before the bushwhack begins.

Soon after heading behind the rock you will see a few fallen birch trees- many of which are rotting. There is a large birch on the left side with a path behind. This is the start of the bushwhack.

Soon enough the trail steepens and becomes more brushy (and pokey!) From here on up the trail is a consistent steep grade except for very few occasions.

There are many large boulders to navigate around on the ascent to the talus field.

A glimpse at how steep it was

Heading up the talus field

Almost abruptly we reach the talus field. It isn’t as wide as we expect and doesn’t last as long as we’d like. We had been talking about these rocks during our steep ascent up. We wanted views!

And great views were had!

Taking a break on the talus field

The rocks were unstable as you might expect so we were careful with our footing. We hung around for a bit to enjoy the beautiful day we had!

There is a cairn marking the heard path that leads to the summit of Vose Spur. It is located in the left corner of the talus field.

Thick brush right before the summit

Once atop Vose Spur we signed the notepad inside the canister and had a lunch break. We got a kick out of the chair at the top- we worked hard for that seat!

On our descent we headed back on a slightly different path to the talus field and entered it maybe 20 feet further down. Other than that we did great navigationally. While we didn’t have issues with navigation we were in agreement that due to the steepness of the hike it was probably the most difficult of the hundred highest. I recommend avoiding this hike on a hot summer day due to its steepness, but on a day you’re likely to be able to enjoy the views from the talus field!

Elevation gain:  2,575′. While this doesn’t seem like much over almost 9 miles. Much of the hike is very mild and about 1600′ is gained in about a mile! See the elevation profile below courtesy of Matt DiFrancesco. 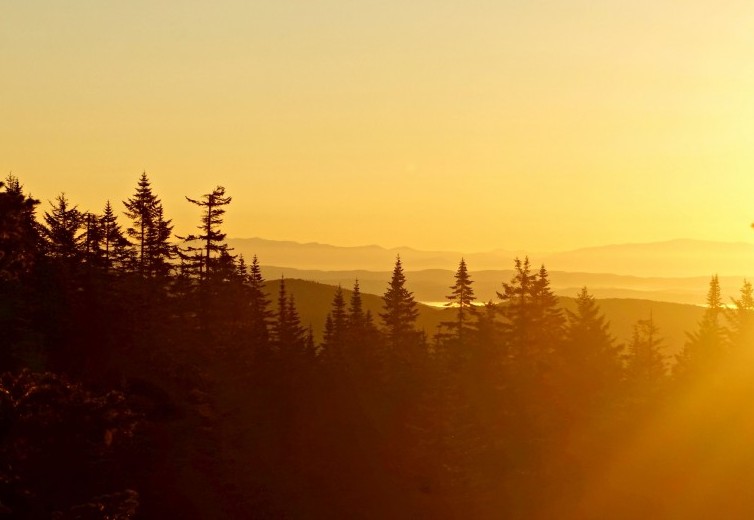