Today we are featuring a wonderful trio: Patricia Ellis Herr and her two daughters have been hiking and backpacking all over the United States with their goal of highpointing every state. Alex and Sage are among some of the youngest people to hike all 48 of New Hampshire’s highest peaks, both at the age of 6. Alex currently hold the record for the youngest person to hike all 48 in winter (at age 9) and they’ve pushed themselves to new levels by backpacking the Camino de Santiago and Calofornia’s John Muir Trail.

What was your first experience hiking together?

Trish — I have taken the girls out walking/hiking since the time they could each toddle.  We used to wander around Walden Pond and through Drumlin Farm (both in Massachusetts).  At that age, it was more ambling than true hiking, but walking in nature is walking in nature…they girls loved to be outside (they still do) and the scenery was beautiful.

Was there a moment that sparked a love for the outdoors and hiking?

Trish — There wasn’t a particular moment regarding love of the outdoors.  I’ve kept the girls outside as much as possible since they were born, so being outside is normal for them.  As for mountain hiking, Sage says the first time she got to the top of a mountain and saw the views, she was hooked.  Alex says her first ascent of Tecumseh, in June 2008, sparked her love of mountain hiking/climbing.  For Alex, it was the sense of accomplishment and the knowledge that she could tackle such a thing successfully, and that there were views to be had from the top.

How did you get into backpacking? Was it a difficult transition from day hiking?

Trish — The girls and I usually travel around the country and tent in campgrounds every year, so the extension of carrying the tent on my back instead of the car wasn’t a big deal.  The only thing that makes backpacking significantly different for us than day hiking is a remaining slight worry regarding animals at night.  I’m strict about no food smells in our tent, so the fear is illogical…but human, I guess.

Is there anything about backpacking that still makes you nervous or anxious?

Sage — I don’t really like the dark.  I’m also slightly worried about people out there harming us, though Mom says that kind of thing is not likely to happen on the trails.

Trish — I still worry a bit about food smells in our tent…sometimes I check four times to make sure I haven’t forgotten to put the toothpaste in the bear bag/canister, etc.

What was it like hiking the John Muir Trail? Did you find it more difficult or easier than the trails you typically hike in the White Mountains?

Both Alex and Sage — The John Muir Trail was much easier than hiking in the White Mountains.  The paths felt flat and smooth most of the time, and when the trail did go up a mountain, it went up using switchbacks.  In the Whites, the trails tend to go straight up and down the mountains.

Trish — I share the same opinion as Alex and Sage.

What advice would you give to other looking to get into hiking or backpacking together?

Alex — Also, do your research.  Don’t go out unprepared.

Trish — Ditto the above.  Go at the kid’s pace, don’t hesitate to turn around if the kid wants to, let the kid get dirty and explore, BE HONEST if the kid asks how far it is to wherever (if you say “almost there” when you aren’t, then the kid won’t trust you and won’t want to hike with you anymore), and don’t make assumptions about what your kid can and cannot do.  Give your kid the freedom to go as far or as he or she wants.

What was the worst hiking/backpacking advice you’ve ever received?

Sage — I like being up there, and knowing that I am up there.  I like the feeling of being on the summit, especially when there are views.

Alex — I like going up.  I like looking ahead of me and seeing how much we still have to go, and I like talking to Mom and Sage about stuff we don’t usually talk about at home.  I like having a view at the top.

Trish — I cherish being in the midst of all that LIFE.  The trees, the vegetation, the birds, the mammals, the frogs….everything is so very much alive.  When I’m inside, everything is dead — the concrete, the dishes, the furniture, etc.  Also, I love hiking with my kids.  They are so observant — they always point out things I would have otherwise missed.  They are strong, and sweet, and just plain good company.

Alex, Sage, and Trish backpacking along the John Muir Trail

Do you have any upcoming hikes or adventures planned?
Trish: We are hiking parts of the Great Wall of China this year.  Also, over the next four or five years, we hope to finish the New Hampshire GRID.  We also highpoint — Idaho’s Borah Peak is next on our list.

To keep up with Trish, Alex, and Sage’s adventures you can visit their site at www.trishalexsage.com! You can also read their book Up: A Mother and Daughter’s Peakbagging Adventure

Share the story of when you took your kids on their first hiking or backpacking adventure! One lucky person will win a signed copy of Up: A Mother and Daughter’s Peakbagging Adventure! 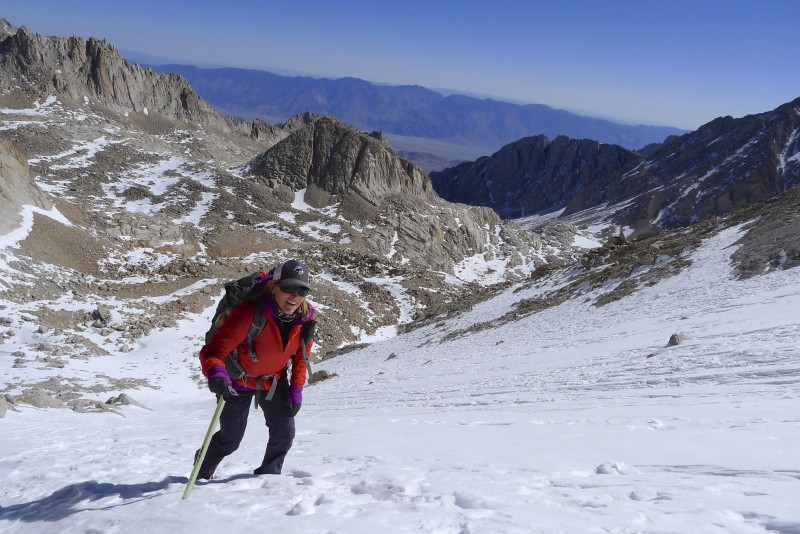