Even though we camped within the Sequoia National Park section of the John Muir Trail, at 11,800 feet, we had no protection from the wind. Those giants lived a couple more miles down the trail from Forester Pass.

While we eat, everyone’s eyes are fixated on the ground, watching the sun’s rays cast over the mountains and slowly creep toward camp. Once I finish eating I race over to the sun and warm myself. I lay on a rock, my bare feet drag through the dry grass. Today we’ll be able to see Whitney.

Through this whole hike the goal is to hike toward Mount Whitney; a peak yet to be seen. The trail guides me toward Whitney, twisting and turning along the way. It’s like playing a long game of “Marco Polo” with the Sierras.

Once again the trail changes dramatically. I am now far below the highest point on the Pacific Crest Trail and surrounded by Sequoias. I reflect on my trip as I continue solo toward Guitar Lake. This venture has shown me how simple life can be and what truly matters. There’s so much we don’t need and very few things we actually need not only to survive, but actually thrive. I feel small and rather insignificant as I pass each colossal tree. I think about how little time people have spent on this planet and how much power and influence we feel that we need.

These past couple weeks nature had been in control of each day’s hike. There’s no other way to be successful outdoors if you aren’t humbled by a tree older than the pyramids. I have succumb to nature. I feel like I’ve opened a door into a alternative manner of living and walk toward Whitney with a new perspective of human existence.

A traditional day consists of many small insignificant decisions, but on the trail, the day is yours. You can put in big miles or have a leisurely lunch. You experience it the way you want to. While many say, “hike your own hike” I have found at times hikers don’t actually mean this when they don’t see eye to eye with your decisions. “You’re going stoveless? Well I’m not sure what you’d do in an emergency situation, but hike your own hike!”

The beauty of the trail is you really can hike how you would like to: Prepare Do your research. Stick to your gut.

Hiking boils down to getting from point A to point B on foot. Simple decisions such as pace, break lengths, snack choices, etc. don’t seem too life changing, but are so freeing. There rarely is anything that you have to do.

That is until you come to a place such as the Crabtree Ranger Station. At that intersection you will find a plastic box full of WAG Bags. On Mount Whitney and a large area surrounding it, you must use these bags to pack out your poop. Because of the rocky terrain, it’s just about impossible to dig a proper cathole. This is one of the scenarios where you don’t have a choice in the matter.

At one time there were solar-powered latrines at Outpost Camp and at Trail Camp. In 2006 the WAG Bag system was put in place and it became mandatory for all hikers to pack-it-out in the Whitney Zone. Used bags must be carried and then deposited in special dumpsters located at the Whitney Portal trail head.

I also found a trio that looked to have been waiting for quite some time. I start up a conversation and learn that a fourth person is at the ranger station looking for her dad. This woman was in her 30s and was hiking with her father when they met up with the father and two teenage girls I was talking with. They all tell me how he had been wearing Birkenstocks on the five days they had been on the trail.

Andy and Kayla catch up and we make our way to Guitar Lake together. That is until Andy finds a good spot to use the bathroom one last time before we get into the official WAG Bag zone.

The trail continues to climb up toward 11500 foot Guitar Lake. Along the way I pass Timberline Lake, a beautiful area with views of Whitney and the route up. This lake is closed to camping. Who wouldn’t want to get a little closer to Whitney, anyway?

Shortly after my hike by Timberline Lake, I see Guitar Lake and an array of brightly colored tents. I see two familiar faces already at camp. It’s the father/son duo that have been hiking a 400 mile section of the PCT. Rob is charging his phone and invites me to give my camera a final charge before Whitney.

They have climbed Whitney in the past and point out the trail. I follow Rob’s finger as he traces the switchbacks ascending the jagged peaks. I have a lot of trail to cover tomorrow. They ask me when we hope to begin and I explain our early morning start. They had planned on doing that in the past but never have.

Guitar Lake can get crowded and there is virtually no shade from the sun. Setting up camp is our first priority once we find a spot. Guitar Lake is the last place to dig a proper cathole before WAG bags must be used. Because of this I am careful of where I filter my water from. I find a very small stream away from any camps and filter water for dinner as well as tomorrow.

We have our last trail dinner together before retiring to our tents. Our plan is to wake up at 3:00 and leave no later than 3:30 to try and see the sunrise on Whitney. Kayla gives me a Benadryl to help me fall asleep. It’s still light out and it’s hard for me to clear my head. Soon I feel the Benadryl kick in. My head heats up and I begin to feel tired. I am sure I will feel groggy by the time morning rolls around, but it’s better than no sleep before ascending Whitney!

When I exit my tent in the morning it will be to headlamps and stars; the final day on the trail.

Previous Story
Day 13: The Trail Isn’t For the Tame 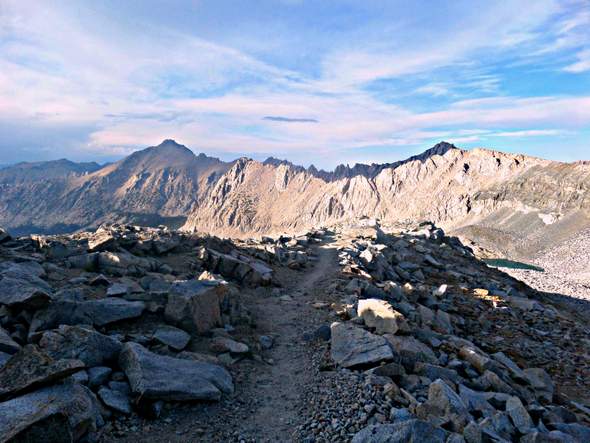 Next Story
Day 15: 97 Switchbacks Until the End 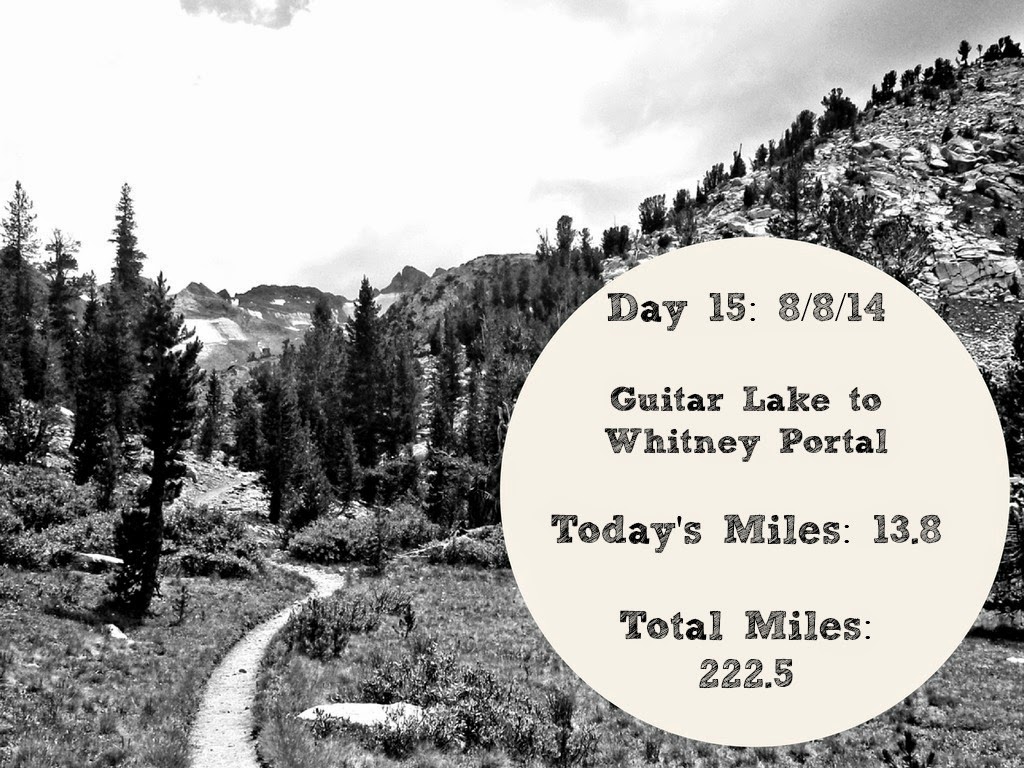