I was driving up to hike the Osceolas when I saw the clouds drift and a bright blue sky appear. I was an hour south of Franconia Notch when I checked the weather and made a change of plans. While I really need a Presi day, I was happy that the forecast had changed (yet again) and predicted less wind for Lafayette than it stated last night.

The trailhead was pretty full when I arrived. During the hike I didn’t see many people until the ridge and many of the cars belonged to a couple larger groups.

Bridge near the start of the hike

I decided to ascend the Falling Waters Trail as I’d rather go up a potentially icy trail than down. With all the recent rain I knew the crossings would be more difficult, but I was hoping the waterfalls would be worth the extra work. Boy, was I right!

2nd crossing of the day

The crossings weren’t too bad. They were trickier than they had been in the past, but definitely doable. The second crossing of the day was the most difficult where the only options required getting your boots wet. Mine needed a good cleaning anyway!

First of many waterfalls

Falling Waters Trail is home to numerous waterfalls of all shapes and sizes. Typically you have to join the crowds in the warmer months or they are frozen come winter. With the warmer weather and rainfall this week, I got lucky with these sights and was super excited to try out my new camera!

There’s much less snow than I encountered last week, but it wasn’t completely washed out. There are some muddy spots, especially lower in elevation.

Even with all this beauty, some people have to ruin it.

graffiti and deep carvings on the trail… really disappointing to see.

So much to look at

The trail gets steeper as you continue on Falling Waters. It eventually alternates steeper pitches and level sections. There was one section near the last of the falls where I really had to pull myself up- could’ve used an ice axe!

I wore microspikes the entire time. There was one or two sections heading down from the ridge where crampons may have made things easier, but there was much less ice than the first time I had done these two in winter. My crampons stayed in my pack for the day.

I wasn’t setting records with all my stops along the way. There was just so much to photograph! Once I was just about to peak above treeline, I added some layers. Until this point I was comfortable in my base layer and occasionally a hat.

The wind wasn’t all that bad (maybe 15-20 mph) but eventually I needed to add more face protection. My new goggles are tinted yellow so I had that Coldplay song stuck in my head on half the ridge.

This was also the first hike I was using my Gossamer Gear Gorilla. I really like the new suspension and how it’s working as a winter pack so far!

First up was Little Haystack and Mount Lincoln before reaching the Gargoyles. This is one of my favorite lunch spots when it’s warm enough to take a longer break here.

On the way to Lafayette (pictured above) I saw a group with a bunch of dogs who looked like they were having a blast! They said they had bright blue skies on Lafayette that I missed while I was taking all those waterfall photos…. I also ran into another large group. Two of the guys had hike Liberty and Flume with me two winters ago. It was great to see them on the trail!

I was really hoping to get some views on the ridge so I decided to continue on the Franconia Ridge Trail to Skookumchuck. It’s an additional two miles, but my thinking was I could keep moving and stay warm, but get more time on the ridge for potential views.

While I hiked too fast off the ridge for a potential undercast, I was rewarded with some beautiful views. The clouds lifted for a few moments and at times were light by the sun and had a pinkish hue. It was really gorgeous!

The hike down Skookumchuck was pretty uneventful. I had been up this route before, but this time seemed longer. I kept telling myself the views atop made it worth the extra mileage! The last mile and a half was very muddy and wet. It was the kind of mud that tries to eat your boots! I eventually made it out and got a ride down a couple exits to my car. Though I didn’t need these peaks for my four season 48, or Trailwrights, I’m counting it for the Grid that I’m not officially working on 😉 I’m just keeping track of it all! 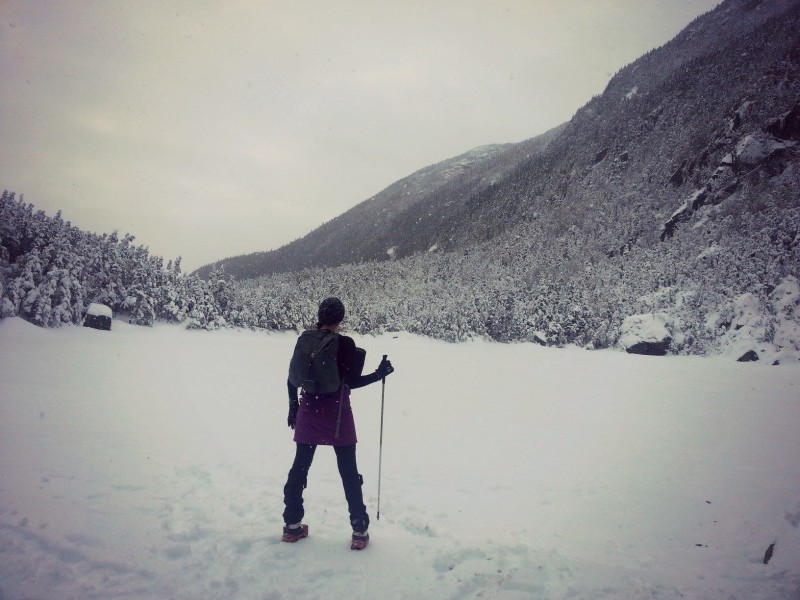 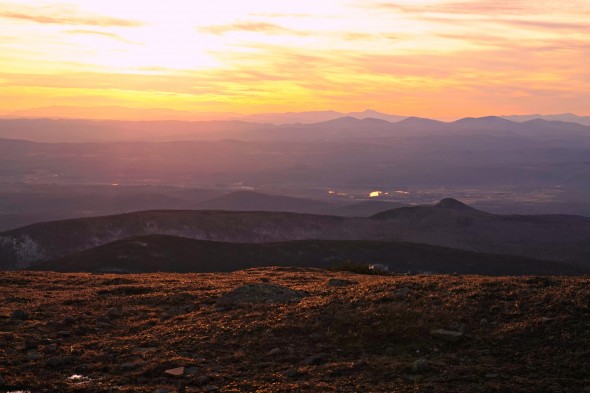