And the waiting game begins. I’m ready to hit the trail, but I can’t miss out on breakfast at Tuolumne. I’ve been hearing wonderful things about those buckwheat pancakes. As I begin to pack up, I feel a set of eyes on me.

“So you’re doing the whole JMT? With just that?”

“Yup,” I reply. Here goes another round of twenty questions.

It’s not that I don’t like talking about gear. In fact I’m a bit of a gear junky, but I was a little over the passive arguments about how I would undoubtedly fail because I wasn’t carrying at least forty pounds on my back. He spits out the same questions I’ve been hearing since day one. Yes, I have everything I need. No, I’m not worried about getting killed. Yes, I wanted to come out here alone.

I talk with a few more people who incessantly tell me how brave I am. I’m just hungry.

I make my way down the hill, use the only toilet I’ll see in a while, and get in line for breakfast. It’s quarter to eight and I’m one of the first few people in line. I stare at the menu and create a million different variations of breakfast in my head.

“Can I get the buckwheat pancakes, a side of eggs, and a hot chocolate?” I ask.

About 15 minutes later, my number is called. I get a few hundred calories worth of syrup and ketchup and make my way outside. Soon after I sit down a woman asks me if I’m doing the JMT. This time our conversation is different.

“I just got off the JMT last week,” she exclaims.

She gathers her belongings and sits across from me.

“Yeah. I work in the park, but my mom and brother were doing it and said I had to leave my job and come join them. I started from Bishop.”

We chat about the lakes and the hardest passes. I just about finish my plate.

“Hey, if you’re not going to finish the last of that pancake, can I have a bite?” she asks.

I head into the store and get a few snacks for the day. They have fresh avocados. As I contemplate which bars I want, I overhear two people talking. There’s a fire in Yosemite and it’s pretty bad. They’ve closed Tioga Pass and some local roads.

As I begin to hike, a smile comes across my face. I feel like a snob, but I realize I’m doing something bigger than all those people I saw going to Half Dome or those camping out for the weekend. This is my life for the next couple weeks. I’m hiking to Whitney.

One of my favorite activities on the trail has become scaring the shit out of everyone I encounter. At first I didn’t mean to. I would politely ask if I could pass or say excuse me and that person would be frightened. I started to go with it and have some fun.

“Holy crap! You scared me!”

“Have a great day,” I respond and continue down the trail.

Lunch on the trail today is a whole avacado and a bar. I contemplate how I’m going to go about eating it. I take my spork and cut around the entire avocado. Surprisingly, the skin comes right off and I dig in. I eat it like an apple, carefully making my way around the pit. I throw the inedible parts into a Ziplock, take a look at my map, and I’m on my way. Donahue Pass, here I come!

I gain elevation for the good part of the day. Looking up, the sky looks dark in the distance. I ask a Northbound hiker about the weather.

“It looks like Mammoth had some weather. It may be coming up quick.”

I take another look at the sky. You’re supposed to stay off the passes in the afternoon. That’s what everyone always says. I see a few more people making their way toward Donahue. I pull out my map and decide to keep going. I have a few more miles below treeline before I need to make a decision.

I see a pretty good rock to take a break at. I have a snack and take a well deserved rest. After about ten minutes, I hit the trail again. As I come to a stream crossing I stop myself. Didn’t I just do this? I quickly turn around and head in the other direction. There’s almost an identical stream crossing. Four rocks across and everything. I turn back and stare in the other direction. I slowly cross. Is this the right way or am I just trying to convince myself this is the right way? I see a group of men taking their break. I decide to completely embarrass myself and ask if I’m going the right way.

“Hey there!” I call out. “So I just took a break and got myself really confused. I know this probably sounds ridiculous, but this isn’t the way to Donahue, correct?”

“Right.” One of them says. “You have to go the other way. Are you thru hiking?”

“Yes,” I respond meagerly. “Well, I guess I’ll see you guys on Donahue.”

Most of my hiking today has been uphill. I know nothing about passes so I wasn’t sure where it started. I figure I’ll know where it ends. In New Hampshire we don’t have passes. I’m a peak bagger at heart, on a mission to hike all 48 4000-footers in each season. Spring is complete and I hope to complete my last summer peaks when I return.

The trail continues up and so do I. Thankfully it just barely sprinkles on me. No thunderstorms today. Suddenly I start to descend. Wait! Where’s Donahue Pass? Did I miss something? I chat with a hiker going North. He says he came from Thousand Island Lake and he’s going to Donahue. I was on it. It wasn’t exactly the dramatic ending to this uphill endeavor I’ve been on all day.

I look at my watch. 4:00. I still have plenty of daylight and I still feel strong. Island Pass is where I planned on stopping, but it’s only a few miles away. I hear some people coming up quickly. It’s the five men I met on Donahue.

“I see you found the pass,” one of them calls out.

I hike with them for another mile or so until they take a break. We introduce ourselves. I immediately forget all of their names. All of them are “vegan-fans”. They decided to eat vegan on the trail because they’ve been obsessed with the lifestyle but have never done it before. They’re your typical bros: Bar hopping road bikers looking for the next testosterone driven adventure they can do together. They’re attempting a 12 day JMT completion.

I continue to hike with them until 6:00. All five of them hike at the same pace or at least they do for now. I tell them I’m going to take 5 and I’ll see them later. I pull out a tortilla, Nutella, and almond butter. Time for dinner.

I continue up and over Island Pass (10224′) and toward Thousand Island Lake. It’s absolutely stunning. I meet a father and daughter team looking toward the lake. They’re lightweight backpackers too.

“Doing the JMT?” I inquire.

“Yes,” the daughter responds. “You too?”

They introduce themselves. Robert and Sara. We decide to camp away from Thousand Island Lake. There’s a sign listing the areas you cannot camp at because of restoration efforts. It’s very buggy as well. We read a nearby sign:

“Want to camp down this way? We’ll be closer to Reds in the morning,” Robert inquires.

Sara agrees. “I could do a few more miles.”

I take another look around the lake. Maybe I’ll scope out a spot. The pair say goodbye and disappear down the trail. A few minutes later I head in their direction.

As I make my way down the trail, I keep an eye out for a bridge. Once I’m over that, I’m good to camp wherever. Almost a mile later, I still don’t see a bridge. I come to a sign. “Agnew Meadows, PCT, and River Trail” are listed. No JMT. I pull out my map. The John Muir Trail and The Pacific Crest Trail follow the same route for about 170 miles, but this is one section where they split. I backtrack a few hundred feet and see Robert and Sara. I inform them of my finding. They contemplate what they’ll do. We can either hike a section of the PCT and meet back up with the JMT before Red’s Meadow or backtrack a mile to the JMT. I decide on the later. Sara jokes that she can come back to do this section of the JMT when she hikes the PCT. We enjoy dinner together (second dinner of tuna and dessert for me), chat for a while, and stay up past hiker midnight (8:00 pm). It was really a beautiful spot.

Robert places his bear canister much less than the advised 200 feet from their tarp.

“Sometimes I sleep next to my canister. I figure one of these days I’ll see a bear out here.”

We all crawl into our tents. I take a look at my maps. Altogether there are 13 pages. I’m on 11 already. I wonder what it will feel like when I get my last few pages at Muir Trail Ranch in my resupply bucket. Soon enough my headlamp is off and I drift to sleep.

Unfortunately I don’t stay asleep for very long. I wake up to a scratching sound. Something small. I try to look out through my bug netting, but it’s just too dark out. I move my hand around the ground in a sporadic attempt to find my headlamp. I quickly turn it on and shine it around being careful not to shine it on my neighbors. Nothing. I hear the noise again and spin around. I finally look directly up. I caught a mouse. It’s a very cute mouse and I’m glad I woke up to it. It would have undoubtedly chewed a hole through the bug netting trying to get out.

Next Story
Day 4: And the Rain Begins 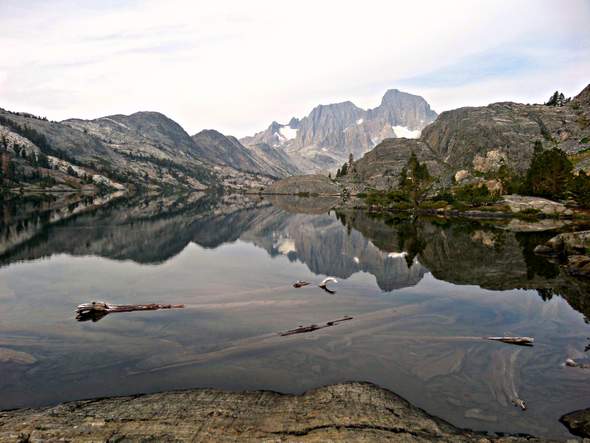