Day 4: And the Rain Begins

I wake up at my PCT campsite, greet my neighbors and the sun. It looks like it’s going to be another beautiful day on the trail. I begin to pack up my belongings and see a couple mouse droppings from my visitor last night. Lovely. Robert and Sara begin to dismantle their shelter as well. We discuss our plans for the day. I plan on resupplying at Reds Meadows today. They tell me they’re ahead of schedule and they’ll probably camp before Reds. They begin the last of their morning chores. Sara tightens the lid of their bear canister and stores it in a pack. Robert carefully folds up their tarp. They have a wonderful dynamic for a father-daughter team. Even though Sara is a teen, she’s not the stuck up, self-loathing type many of us once were. Robert never takes over duties or hovers over whatever Sara is doing. They both love hiking and genuinely want to be here.

Soon enough they make their way down the trail. I glance up for a moment as I eat a spoonful of granola. They quickly disappear into the woods. Did they take a right to continue onto the Pacific Crest Trail? I sling my pack over my shoulder, click my buckle over my chest and hips, and take a left toward Thousand Island Lake.

It doesn’t take long to get into a rhythm and I practically float down the trail. I pass by a few groups of people, scaring the shit out of them as I ask to pass. It’s really too fun to pass up. I was too chilly and lazy to take my long underwear off in the morning (a habit I will repeat) and simply rolled them up. I stop and take them off while a pair of hikers catch up.

“You sure were moving!” one of them calls over to me.

I get my first trail name suggestion- “Lightfoot”. I never used it on the trail, but I like it.

I stuff the long underwear in the mesh pocket of my Mariposa and continue down a series of rocky switchbacks. The rocks remind me of home.

I planned on making it to Reds by 3:00. I reach the junction of Devil’s Postpile and glance at my watch. I run into a couple hikers around my age.

“Are you going to Devil’s Postpile?” one of them asks me.

“What, do you have other places to be?”

I laugh and decide to join them to Devil’s Postpile. The rain begins to come down harder as we make our way to the national monument. We weave through tourists oohing and aahing their way to the site. Once we arrive I get my rain jacket out and a trash bag to cover my pack. The trash bag isn’t the best fit, but I figure it will do.

“My friend Kayla is going to kill me,” John says. “I told her we wouldn’t need rain jackets out here.”

Kayla and Andy join us at the hexagonal columns of basalt.

“Here we are at the pile of rocks. We have lots of that in New Hampshire,” I remark. We don’t spend too much time there as the crowds start to get to us.

“Are you going to rainbow falls? You have to check it out!” someone calls over to us.

We decide to head to Reds and get a bite to eat. Kayla checks out the route on the map and we follow it. We end up on a road, but can see some campers.

“Right.” Kayla says. “Oh wait!” She takes out her compass and proudly makes use of it, knowing it may be the only opportunity she’ll have to use it. “Definitely right.”

As the road comes to a crest, we see a sign. “Reds Meadow”. We walk under the large wooden frame holding the sign and enter Reds Meadow Resort. And it’s not even 2:00.

We set our stuff down outside the grill and chat with a few fellow thru hikers in the rain. A beer appears in Andy’s hand and we decide to order some food.

The grill is small and only has a handful of tables. It’s not nearly as busy as I thought it would be. We sit down close to an outlet and we plug our electronics in. A waitress comes by and insists we move to a table that had just been cleared off.

“It’s ok. We already smell,” I say. We comply and move over. We all decide what to order, but John states that he’s not eating here.

John is a former Appalachian Trail thru hiker. He began the trek straight out of high school and totes around the same tent he used on the AT seven years ago.

As we wait for our order, Linkin Park is playing in the background. I learn a little bit more about the trio I joined. Andy and Kayla began dating in college and live together in Austin, Texas. They decided to hike the JMT together and invited Kayla’s friend John along. He and Kayla met in college as well. He now lives in Northern California’s hippy town, Humboldt.

The Strokes now play over the speakers and John announces that he can’t listen to it. Andy points out that it’s playing on an employee’s I-Pod. Without a second thought, John sneaks behind the counter and scrolls through the I-Pod. I watch as a waitress looks over in shock and another employee asks John what he’s doing.

“I just can’t listen to The Stokes,” John states. The three of us bust out laughing. I begin to think I’ll be spending more time with this group.

Our lunches come out one at a time. If you eat at Reds, take Andy’s advice: always go for the patty melt.

I finish my last few french fries and look toward the door. It’s still pouring outside.

“Hey! How’s it going?” I recognize one of the hikers from my hike yesterday approaching Thousand Island Lake.

“How’d you beat us here?” he responds.

“I don’t know! We even went to Devils Postpile.”

I really have no idea how I got to Reds before them. I thought they would be long gone, especially since I had to backtrack a mile to get back onto the JMT this morning.

After lunch I call my fiance, Keith, and my parents. My stepmom tells me how much everyone back home has really enjoyed tracking my status. My dad purchased the Delorme InReach right before I left on the hike to give them some piece of mind. They were able to check the map and see my progress at anytime which made them feel a little less helpless 3000 miles away.

I get the resupply package I sent to myself and set off on a mission to clean out the Nutella that leaked inside my bear canister.

We ask where the JMT continues and find it on the other side of the property.

“Do you know any riddles?” John inquires.

“I’ll start off with an easy one. What gets wetter as it dries?”

We begin to hike up switchbacks surrounded by burned trees, many of them toppled over. It was eerie how all those trees had been destroyed just in that area.

“It could be a microburst,” John explained.

It turns out he was right. In 2011 wind had blown in a direction the trees were not used to (around 150 miles per hour) creating column of plunging air, knocking down hundreds of trees. Forest fires are common which explains the charred trees. *You can read more about the event, known as “Operation Blowdown” here.

“Is it a towel?” I ask after a few minutes of hiking.

“Yes, a towel is something that gets wetter as it dries,” John confirms. “Here’s the next one: There was a man that lived one the 56th floor of a building. He takes the elevator. If it is sunny then he goes to the 32nd floor and takes the stairs the rest of the way, if it is rainy then he goes all the way up. Why?”

“Does he visit someone on the way?” I ask.

“No.” Responds John. “He doesn’t visit anyone. He comes right home after work. He’s a nine-to-fiv-er.”

After a few miles, we arrive at Upper Crater Meadow where we decide to camp. Another big mileage day already behind me. We find suitable places to set up our tents and determine where our “living room” and “kitchen” should be. I didn’t know this then, but that was the end of my solo adventure. I had found my trail family. 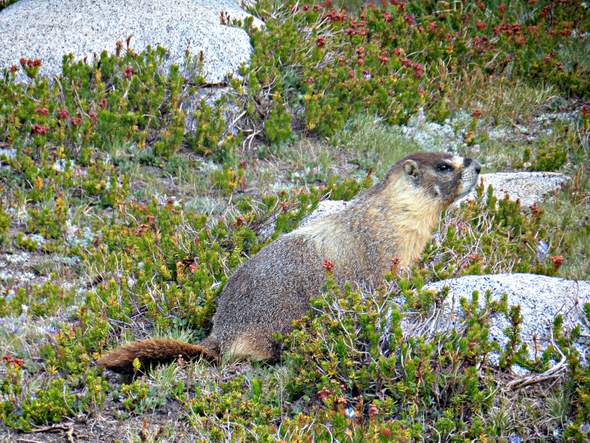 Next Story
Day 5: Smoke and Water 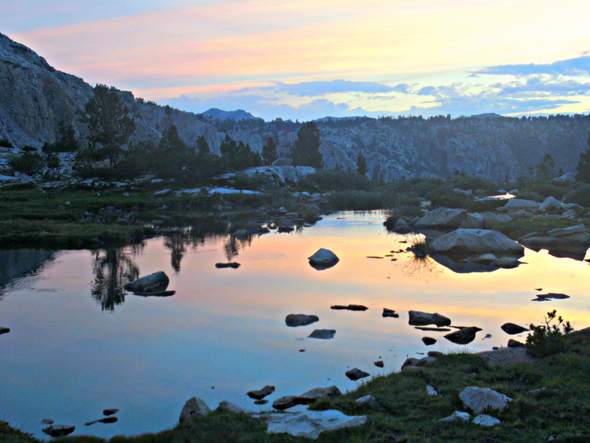