JMT Day 1: The Start of Something Big

And so it begins. This is the longest anticipated hike I’ve had to date. Back in February I sat at my computer faxing my permit for a thru hike of the John Muir Trail. I spent months planning my itinerary, food needs, resupplies and consulting with hikers who had done the trek before.

The day prior to starting this hike, I had stood at the very spot pictured above with my fiance, Keith, taking my photo. We had just ended an eight day vacation in California and hiked up to Vernal Falls together.

This time, instead of staying on the Mist Trail, I bared right to head up the 221 mile John Muir Trail. The asphalt path was behind me as well as the crowds. I took a deep breath and took my first steps on the John Muir Trail. Solo.

I couldn’t help but think of many of the negative comments and unwanted advice I heard before beginning this journey. I had planned a 16 day itinerary and was going at it on my own. Online some had glanced at my Facebook profile pictures. While many are of me atop mountains, most did not have me accompanied by a 40 pound pack. I was blatantly told I could not do this hike by complete strangers. One person even told me to go to Disneyland instead because I was contemplating bringing a small mp3 player to use when going to bed. A few people criticized me for going at it alone because I’m a female. I put all that negativity aside and kept walking.

My destination of the day, unfortunately, was Little Yosemite Valley. I was lucky enough to get a permit out of Happy Isles Trailhead (the official starting point of the JMT) but I didn’t get a pass thru permit. This meant I could only walk 4.6 miles to the Little Yosemite Valley (LYV) Campground and hang with the crowds.

My journey began with a lot of questions and comments. I heard remarks like “you can’t possibly have everything you need in there” or my favorite “skinny girl, skinny pack.” I was surrounded by day and overnight hikers who were carrying 35-65 pounds on their back. How could I possibly be carrying everything I needed to hike 16 days?

I knew going ultralight would mean getting a lot of questions on the trail, but I wasn’t prepared for how many people would approach me. I began with a base weight just under 12 pounds. This included my bear canister (BV500) that weighed a whopping 2 lbs 9 oz empty.

I got to camp 2 1/2 hours after I began my hike. I was not ready to camp but I had no choice. I set up, talked to some people heading up to Half Dome in the afternoon heat, and took a swim.

This little guy (Steller’s Jay) kept me company at my site.

When it’s warm, I set up my tarp high. It takes some practice, but my Six Moon Designs Wild Oasis shelter did the job. It was really nice being able to have my Gossamer Gear poles double as the support for my shelter. A 4.1 ounce pole really can hold up a shelter in the wind and rain.

Later that day, a ranger came around to ask for permits. She went to a larger group of 5 camping in the site next to me. I stopped journaling and listen more carefully to their conversation as she was there for a while. “So you’re going to lie to me?” I heard the ranger say through my tent wall. I walked over to the bear box at my site and had a snack. I assumed they didn’t have pemits. Minutes later she called in on her walkie that this group had Cocaine. She took it from them and gave one of the campers information for his court date. Doing hard drugs on Federal land is serious business. Once she left, the group was quiet for about thirty minutes. Finally a girl piped in with, “My dad knows tons of lawyers so don’t even worry.” Good luck with that.

Soon after another ranger was being questioned about bear safety. “Yeah, I’ve seen bears roll the bear boxes like nothing!” I looked over at the nearby bear box and imagined it being rolled over me in my tent. Between that and the high possibility of the campers next to me forgetting to put scented items away, I lay in bed that night in fear of bears. Or maybe just the stupidity of others.

Thankfully I was in good company. I stayed up much too late for a hiker talking with a father-daughter team excited to conquer Half Dome for a third time. It was nice to have some people to share my first night with. I slept better than I expected to that night. Before I drifted off to sleep I was running numbers in my head and planning where I could hike to tomorrow. I thought to myself, “Starting today all I have to worry about is walking and eating.” Thru hiking was beginning to sound nice.

Continue to day two…
You can follow me on Google+ or Facebook to keep up with my JMT story! 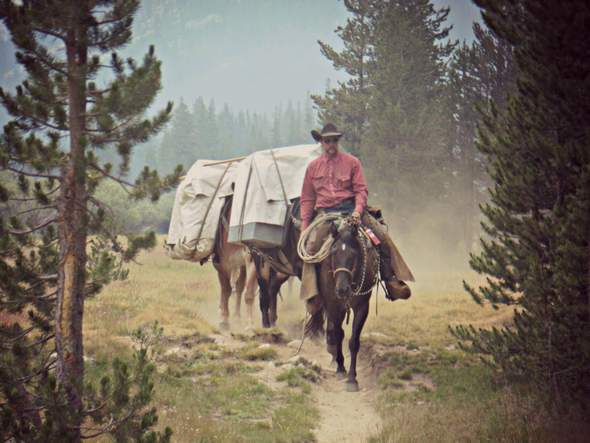 12 Responses to :
JMT Day 1: The Start of Something Big